This is what the Missouri Botanical Garden looks like after dark these days.
It costs $15 to get in and experience "THE GLOW" and I haven't made time, but it is free to stay out and snap pictures through the fence...and I am half-a-block away.
So, is this the bum's view or an advantage of being a neighbor? 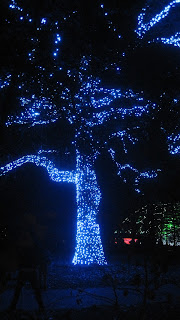 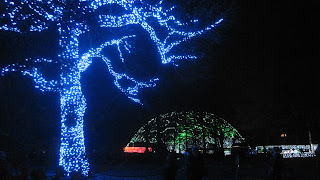 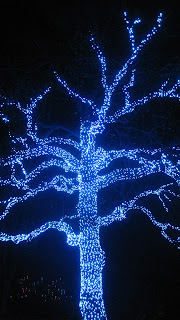 The next morning when I biked past, the cat was gone. 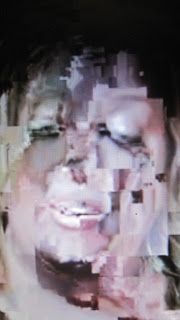 This Wednesday afternoon, I dropped what I was doing to go pick something up at the library.
I got my bike out of my apartment and noticed that the sky was in that "magic hour". I forgot to bring a camera, but rode through Tower Grove Park slowly to take it all in. The oddly warm, December air. The light through the bare branches.
I have seen this before.
One afternoon, I was dismounting at the library and took these through a butterfly sculpture near Southwest and Kingshighway. 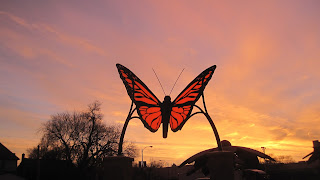 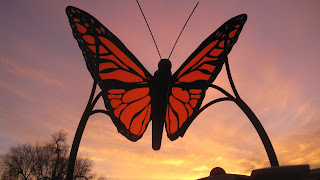 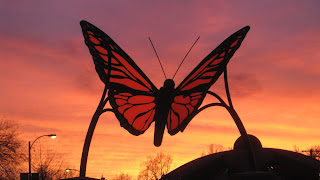 By the time, I left the library, the "magic hour" was gone.
I rode through some alleys and cut East on Shaw and then South on Tower Grove where the traffic was urgent. The stops and starts of the end of this fucking humpday workday were annoying to the commuters. Again, to my right, the lights were glimmering as I passed slowly; as they appeared through the grates and between sections of stone wall. Eerily, bell music and some other kind of music sounded, but was barely perceptible over the rush of the hour past my left shoulder.
I dumped off my books and a DVD, swapped shirts and rode out for a few pints.
Later, I returned to the blue tree with a pleasant buzz, a camera and a friend. It was a December, 2015 version of the knothole gang.
What?
What is the moral of this story?
One man's magic hour is another man's rush hour, or something.
Posted by Zed Naught at 11:42 PM

Makes me miss St. Louis AND you Brett!
What a different perspective it is from on a bike/inside a car.
People say cars equal freedom...it all depends on how you use your tools!